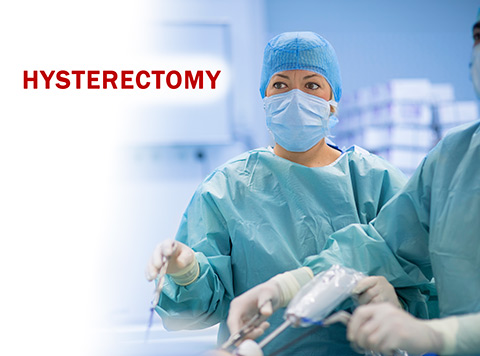 Removal of parts or all of a woman’s reproductive system is a fairly common surgery for women to treat a number of health conditions. Commonly referred to as hysterectomy, this term actually refers only to the surgical removal of the uterus. A total hysterectomy is when the cervix is removed as well, which is generally done. A subtotal, partial, or supracervical hysterectomy refers to the removal of the uterus above the level of the cervix, leaving the ovaries intact.

When the ovaries are taken out – a procedure which immediately induces menopause if both are removed, and in some cases, even if only one is – it is called an oophorectomy or an ovariectomy. If a woman has already gone through menopause, the ovaries (which are no longer functioning) are almost always removed during a hysterectomy to alleviate the risk of developing ovarian cancer. When hysterectomies are performed on younger women, the ovaries are usually left intact unless they are unhealthy, so they can continue to produce estrogen.

While the surgery can be a lifesaver in a number of instances, it is no small affair. The uterus can be removed either through an incision in the abdomen or through the vagina – depending on the reason for the surgery. In addition to the risks involved with undergoing major surgery, this procedure carries with it the potential for a number of side effects – both physical and emotional.

Critics of the surgery say that it is done too often in situations where alternative, less extreme treatments are available. The bottom line is that before deciding to have this type of operation it is important to be certain of why you are having it done and to understand the side effects you might experience.

About 74 percent of hysterectomies are performed on women aged 30 to 54.

Should you have a hysterectomy?

There are a number of conditions that make hysterectomy a necessity. They include invasive cancer of the ovaries, cervix, uterus, or endometrium; severe, uncontrollable pelvic infections; and in some instances, excessive uterine bleeding.

A hysterectomy can also be an appropriate treatment in situations such as extreme prolapsed uterus, precancerous conditions in the reproductive organs, advanced endometriosis and fibroids – depending on the nature of the condition.

In many other cases, depending on the problem, alternative treatments – less radical surgeries, for example, or hormonal or drug therapies – are available.

If you are experiencing abnormal uterine bleeding or severe abdominal pain, it is important to see a doctor as soon as possible. The cause can be:

There are a variety of tests that can help determine the cause of uterine bleeding.

Hysterectomy side effects and risks

Along with standard risks associated with undergoing surgery and the bleeding or infection that can follow a hysterectomy, a number of side effects are linked to the procedure.

When both the uterus and ovaries are removed the body immediately halts estrogen production, abruptly stopping periods and bringing on a number of hormonal changes. And while menopause that’s drawn out over a number of years is no picnic for some women, experiencing all the symptoms at once can be even more difficult. Hot flashes, vaginal dryness, constipation, and sexual problems are not the only adverse effects to contend with. 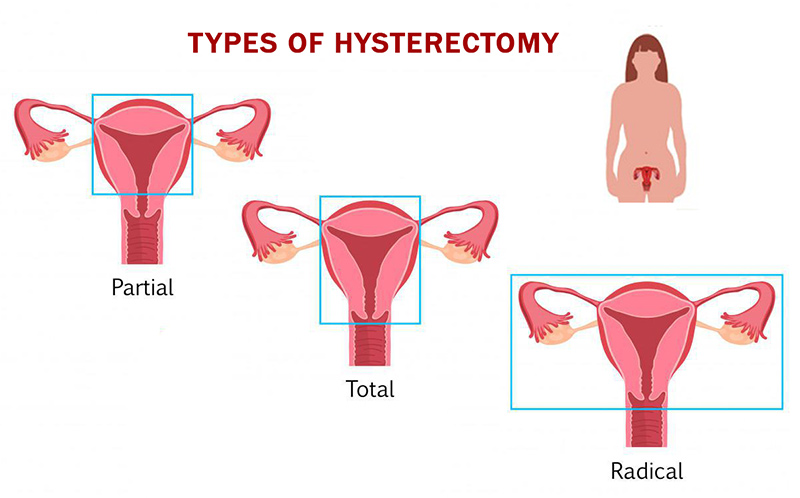 There are psychological implications as well. There can be feelings of loss of sexuality or femininity and sadness over no longer being able to bear children. Beyond this, some research has shown a link between the surgery and depression, but this is not universally accepted. A personal history of depression and anxiety makes a woman more susceptible to experiencing such feelings after surgery.

There are also long-term health risks associated with surgically-induced menopause. Regardless of a woman’s age at the time of surgery, her risk of heart disease and osteoporosis is immediately increased. The removal of the ovaries decreases the number of years the woman is exposed to the bone-strengthening effects of estrogen.

Hormone replacement therapy (HRT) can help make some of the changes tied to menopause occur more gradually if it is started immediately after surgery and taken indefinitely.

A woman who’s had a hysterectomy when younger (but keeps at least part of an ovary) can expect a natural menopause – though possibly one to two years earlier than average.

Before making the decision to have this type of major surgery, you should get a second opinion. It’s important to take your time, weigh your options, and decide what treatment is best for you. Unless it is truly a life-threatening situation, chances are there is a less radical form of treatment that may be effective for your condition. Do not be afraid to ask your doctor any questions regarding the procedure and other options.

If you decide a hysterectomy with an oophorectomy is the best option for you, there are some things you can do to try to lessen the side effects. First, it’s extremely important to understand why you are having the surgery and the changes that will take place in your body as a result. Also, understand that psychological responses are to be expected, and give yourself time to deal with them and accept the changes you will experience. It’s also worthwhile to weigh the pros and cons of HRT and decide if it can help you. And when it’s all over, don’t forget you will still need to get annual Pap smears to screen for vaginal cancer.

Question:
I’m 41 years old and have a fibroid. I’ve been encouraged to have it removed, and my doctor even suggested a hysterectomy. I have gotten lots of different advice like, “Get it all out, including your ovaries, so you don’t have to go through hot flashes.” Since I’m not planning on having any more kids, I’m starting to think I may want my uterus and ovaries out – all at the same time with the fibroid – what do you think?

Answer:
You’ve touched on a very common question: hysterectomy or myomectomy? A hysterectomy is the surgical removal of the uterus. In a myomectomy, uterine fibroid tumors are surgically removed from the surface or wall of the uterus and the defects are then reconstructed to allow preservation of the uterus. A myomectomy is the procedure of choice for a woman who wishes to preserve her fertility. It may also be the preferred procedure for a woman who feels a strong desire to keep her uterus and have only the diseased tissue removed.

While the uterus has no known hormonal function, some women feel that their cervix contributes to their enjoyment of intercourse and for this reason have chosen myomectomy (or supra-cervical hysterectomy) over hysterectomy. Many women prefer the freedom that a hysterectomy affords them: no more bleeding and no more worries about birth control!

Fibroids may return following a myomectomy. However, even if you did develop another fibroid, it is unlikely that it would grow to a bothersome size prior to your natural menopause. It is generally felt that the chances for regrowth decrease significantly if a myomectomy is performed after age 35. A myomectomy is associated with a greater risk of infection as well as a greater blood loss than an average hysterectomy.

Fibroids have a rich vascular supply which helps support their growth. As a fibroid is removed, the space which it occupied is obliterated with suturing, yet a small pocket of blood may remain and serve as a potential source of infection. Because of the increased blood loss that occurs during a myomectomy, I always discuss autologous blood donation with my patients undergoing this procedure. Many women prefer to have banked their own blood in advance as a precaution. Women who elect a myomectomy are motivated to preserve their uterus and are willing to accept a greater risk to do so.

As for the removal of your ovaries at the same time, I think you need to consider your age. At 41, you can expect normal ovarian function for most of the next decade. If your ovaries are removed at the time of hysterectomy, you will experience a sudden fall in your hormone levels and significant menopausal symptoms.

It is generally recommended that women consider removal of their ovaries if they are 45 or older at the time of their surgery. The concern with leaving the ovaries in place is the risk of future development of a malignancy. Many women prefer to have their physician inspect their ovaries at the time of surgery and only remove one or both of the ovaries if they appear to be involved in a disease process (endometriosis, for example).

You need to look at your situation and weigh your personal desires with the risks and benefits of the two procedures to arrive at the choice that is right for you. You should feel fortunate that your situation is one that affords this luxury of choice. And remember, with either procedure, the fibroid tumor(s) will be removed; this will help alleviate any abnormal bleeding, pelvic pressure, or pain that you have been experiencing.