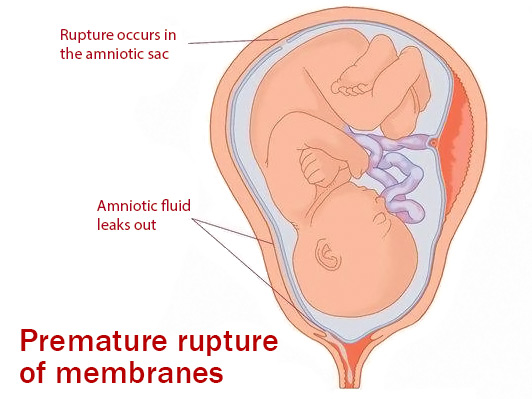 The amniotic sac, or membranes, contains the amniotic fluid and baby and usually breaks during the early stages of labor, often referred to as the water breaking. However, sometimes the sac breaks early, often hours, or even days or weeks before contractions begin. This is referred to as premature rupture of membranes, or PROM, and occurs in 1 in 10 pregnancies.

When it occurs after 37 weeks it is referred to as PROM; however, when it occurs before 37 weeks, it is called preterm PROM, or PPROM. PPROM affects 1 to 3 percent of women and accounts for approximately 34 percent of all premature births.

Premature rupture of membranes can be dangerous to the fetus and the mother because the amniotic sac acts as a protective barrier for the fetus, shielding it from bacteria and viruses. Once the membranes have ruptured, the risk of infection increases the longer the fetus remains in the uterus. In addition, so much fluid may be lost that there is no cushion left around the umbilical cord, which can cause it to become compressed and cut off oxygen and blood to the fetus.

Most women go into labor soon after their membranes rupture (approximately 9 out of 10 begin within 24 hours); however, if labor has not begun within 24 hours, the doctor must decide whether to try to prevent labor and delivery until the baby is more mature, or to induce labor and possibly treat the complications of prematurity. Once the doctor has confirmed the membranes have indeed ruptured, he or she will try to accurately determine the age of the fetus and the maturity of its lungs.

If the fetus is mature enough to be delivered safely, the doctor will induce labor; if the lungs are immature, the doctor may give the mother steroids to help the lungs mature before inducing, or medication to stall or prevent labor. During labor, the doctor may try to replace some of the fluid to cushion the baby and the umbilical cord.

Doctors are not sure what causes PROM. However, some risk factors have been identified, including smoking, excess amniotic fluid (polyhydramnios), uncontrolled high blood pressure, multiple gestation (twins or more), having a short cervix, fetal fibronectin, placental abruption, and a history of preterm birth caused by PROM. In addition, certain procedures carry a risk of premature rupture of membranes, including amniocentesis and cervical cerclage (to treat cervical incompetence). When PROM occurs at term, it is thought to be caused by the natural weakening of the membranes.

The prognosis of premature rupture of membranes depends on when it occurs; the earlier in the pregnancy, the less chance the baby has of survival. However, most babies born between 34 and 37 weeks have no serious complications due to premature birth.