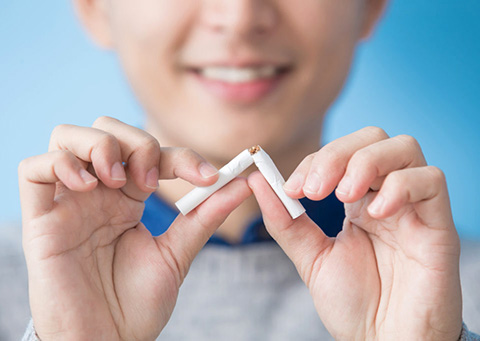 Compared to men, women seem to have a more difficult time giving up their cigarettes and quit smoking. Scope out any drugstore and you’re bound to see boxes of patches and nicotine gum. And with a prescription, you can get an inhaler or a puffer. But research is showing that nicotine-replacement therapy (NRT) — the first-line treatment — is often less effective for women. Again, the final word on why isn’t in yet, but it makes sense that if you’re a woman who smokes for more than just the nicotine rush, a gum or patch alone won’t cut it, says Neil Grunberg, Ph.D., a professor of psychology and neuroscience at the Uniformed Services University in Bethesda, Maryland.

The jump in interest comes not a moment too soon. A whopping 23 million women still smoke, according to the latest statistics from the Centers for Disease Control and Prevention in Atlanta. In 2009 alone, 70,000 women died of lung cancer — 10 times the number who died in 1980. And unfortunately, the trend shows little sign of reversing itself: lung-cancer rates for women are on the rise.

There are obstacles to remaining a quitter, too. Doctor after doctor reports that fear of weight gain is a huge roadblock for women. No doubt you’ve heard anecdotally that women put on pounds when they quit, but it turns out that this has been proven in lab studies as well, and once again, women are especially at risk. Women eat less than men when they’re smoking and gain more weight when they quit, says Grunberg, whose lab pioneered this research. It appears that nicotine speeds up a woman’s metabolism more than it does a man’s, and when the drug is gone, a woman’s metabolic rate slows even further than a man’s. Sometimes the resulting weight gain can be as much as 20 pounds, which is often enough to induce a smoking relapse.

If physical obstacles to quitting don’t stand in a woman’s way, mental ones often do. As many as 80 percent of women started smoking as teenagers and have used the habit as a tool to deal with their emotions ever since, notes Linda Hyder Ferry, M.D., an associate professor of family and preventative medicine at Loma Linda University School of Medicine in California. “They need to learn how to live life again,” she says.

Tips on how to quit smoking

If you’re a smoker, you’re probably thinking, Oh my God! How am I ever going to kick this habit? Relax. The how-to-quit picture may not be perfect, but at least it’s in focus. Researchers now know that a one-size-fits-all approach to quitting just won’t work — especially for women. They believe that nicotine dependence is akin to a chronic disease, one that needs to be treated with a variety of aggressive therapies. So with that in mind, self devised this mini-plan to help you prepare to become — and stay — a nonsmoker.

Take these steps before you set your quit date:

Good. Cigarettes are out of your life. Now keep the ball rolling:

Experiment with your treatment. Some medications work better than others — one brand of patch, for example, might have a much stronger effect on you than another — so talk to your doctor about helping you find one that works. (But don’t expect NRT necessarily to kill cravings entirely: “The standard over-the-counter patch will badly underdose 80 percent of smokers using it,” says David P.L. Sachs, M.D., clinical associate professor of medicine at Stanford Medical School in California.) You can also mix and match: A study just reported in the Archives of Internal Medicine found that people who use both a nicotine patch and a prescription inhaler are significantly more likely to remain smoke-free after a year. Zyban, a prescription antidepressant that’s approved for smoking cessation, may also be worth considering. “The combination of patch and nasal spray, or patch and gum, or patch and Zyban is significantly stronger than any method by itself,” Dr. Sachs says.

Seek help. Make an effort to drum up as much support as possible, or consider quitting with a friend. A stop-smoking groups on social networks can also help you learn to manage stress so you’ll be better able to fight the smoking urge when something’s got your goat. If you really need extra support, consider seeing a therapist for specialized care. And, most importantly, if at first you don’t succeed, try again — please. Your life may depend on it.